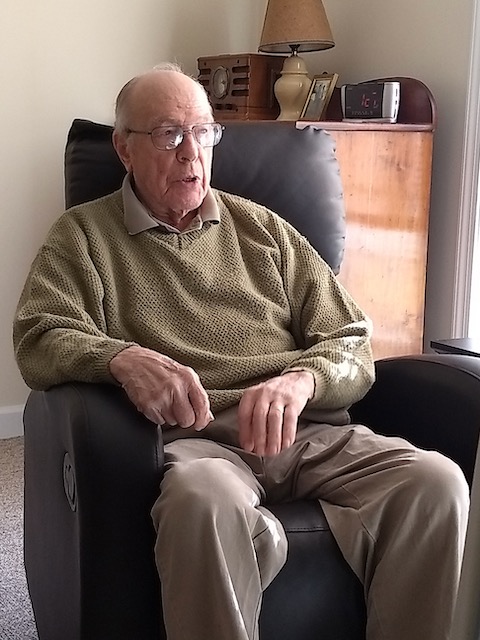 Dad would playfully say that he went to the school of "hard knocks", but he was always an optimist. "Perservere" was his motto, and my sister's 'favorite' guidance from Dad. All three of his kids got to put that in to practice, and had a fantastic role model right in front of us.

Born in 1929 the middle of seven kids on a farm in North Central Ohio, he knew hard work his whole life. He was a linesman on the railroad climbing signal poles across Ohio, and much later he strapped on his old climbing spikes and used those skills to mount a light at the top of the power pole at our home on Lindsey Rd. in 1978. Dad was always working on something; either 'cleaning up brush' on "the land", mowing the fields, or digging post holes for putting a locust tree-post fence line around our 22 acres just outside Lexington. Dad loved being outdoors. Period.

Fishing, hunting, and later in life, carrying binoculars and his camera out into the fields and woods to 'track' wildlife was Dad's entertainment. He could fix just about anything, and as a hardware man for over 40 years of his life, he always would 'use the right tool for the job'. He also said to his kids, "you can borrow any tool I have, just put it back where you got it". "A place for everything and everything in its place" describes his barn, his garage, and the various compartments of his pickup truck.

He'd pitch in a hand to help a friend or neighbor with a project; all kinds of projects. The 'bus stop shelter' that he and our next door neighbor built together back in the mid-70's still stands at the end of Clearview Drive just West of Lexington. He 'built it right'. A concrete pad, deep foundation holes (also anchored with concrete), sturdy bench, angled shingled roof, and painted "Clearview Drive" sign made from a routered-out 2x6 has kept kids warm out of the winds waiting on the school bus for nearly 50 years now.

Dad loved his family and many long-time friends. He kept a little notebook over the years of phone numbers, addresses, but not email addresses (Mom did email, Dad never did). That little book is a well-loved, tattered, patched, marked-up history of friends and family for well over 1/2 a century. We'd often get in the car and go visit friends and family on Sunday afternoons in Galion and Crestline.

Dad was diagnosed with dementia nearly a decade ago, and that disease progressed unmercifully as we know that it does. Dad's (and Mom's, as his primary caregiver for many of those years) battle with it was no exception. There were a few things that hey remembered/always asked about all the way up to the last time that I spoke with him in January, 2020; "You live in Texas. Do you like it there?" Then he'd just say "Texas. How long a drive is that?" and ultimately, "well you made my day."

He'd light up when you showed up, but even moreso when he grasped even the slightest bit of recollection that you were someone that was dear to him; as each of his children, his wife, his brothers and sisters, neices and nephews. He always encouraged us to "just listen" to other people. "A conversation is two ways". He was patient, while he still had a way to do whatever it was that needed to be done. That was a little tough on kids earlier in life, but Dad became the best hugger you ever did meet round about my freshman year of college until the last day that I saw him.

After Mom's passing on January 27, 2020, I took some linens over to Dad at his care facility the day before Mom's memorial. He was 'walking a lap' with one of the staff and had just passed in front of me as I entered. He was chatting along good-naturedly with the woman who was alongside steadying/guiding Dad back toward his wing. I hung back just a bit watching and listening to them. Dad was just out for an enjoyable walk. Dad hadn't seen me yet since Christmas, and he hadn't recognized me much even then. He often confused me with his younger brother, Richard.

But that day in late January, Mom having just passed somewhat suddenly, that was still really fresh on my emotions. I came up alongside Dad, and struggled to just get out "Hey, Dad!" without sputtering like a blubbering kid in tears. He looked up to his left to see who had spoken to him, and without hesitation, his eyes lit up and he immediately said, "Michael!" and turned to the woman who was walking with him and he said, "This is my son Michael!". I hadn't seen a moment of clarity like that from Dad for at least three or four years. I was floored, and overjoyed. The clarity passed soon enough, but that moment was a gift.

Before his dementia, he'd usually end a phone call with, "Great to hear from you. You made my day!". Dad, you made so many of our days. Go pull Mom out on to the dance floor for a jitterbug and hug grandma. You've been looking forward to seeing Grandma again for many, many years.

Your family loves you, Dad. 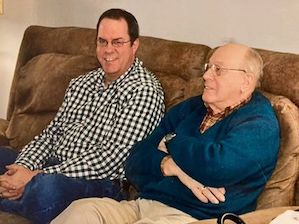 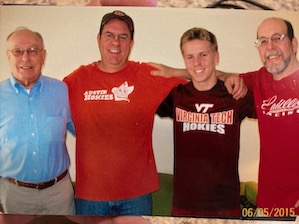 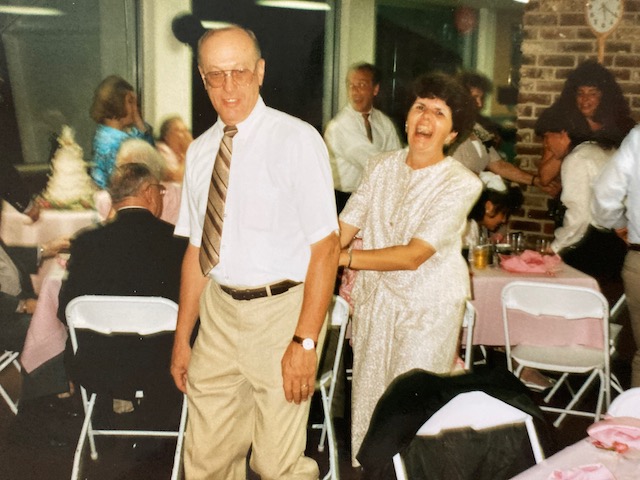 Dad and Mom at a cousin's wedding sometime in the 80s. 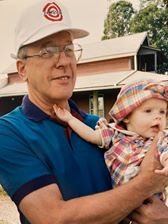 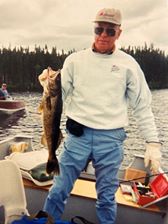 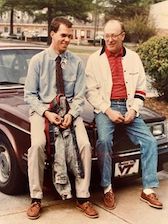 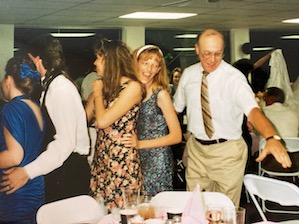 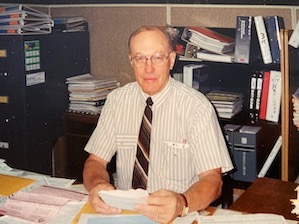